My Vote is For…

Today, at 8:04am in my Democrat blue and Suffragette white, I voted for our first female president. I was, and am, overcome with emotions. I have been crying pretty much non-stop because this vote was for me in so many ways, but it was for other people even more.

It was for groundbreaking women who came before Hillary. Not just Susan B. Anthony and Elizabeth Cady Stanton, but for Marsha P. Johnson, Sylvia Rivera, Fanny Lou Hamer, Shirley Chisholm, Angela Davis, Dolores Huerta, and Grace Lee Boggs. It was for the countless other women of color I never learned about in school because their narratives didn’t matter to my teachers.

My vote was for the many honorary nieces and nephews in my life. For them to grow up in a world where a woman president is as normal as anything else. For my nieces to say, “I want to be president one day” and for them to be told “of course you can” and not just be given a pat on the head. For my nephews to realize a woman in power isn’t a threat to their masculinity, but rather someone who is worthy of dignity and respect.

My vote is for the many students I have been in community with who are either undocumented themselves or have close family members who are undocumented. For these students who simply want to contribute to this country: Their time, their talents, and yes, their taxes.

My vote is for my students who take on crushing student loans because they fall in love with their education and are then are swimming in debt, leading to the inability to live independently on their own, buy a home, start a family, and help grow the economy.

My vote is for, let’s be honest, the vast majority of my friends who identify as LGBTQ. My vote is for their right to love and build lives and homes together, to lovingly bring children into their families, and to be able to live their lives without fear of violence or being fired for simply being who they are and loving who they love.

My vote is for the far too many students and friends I know who are survivors of sexual assault. My vote is to tell them that the next president of the United States should not be a sexual predator and to let them know this toxic stew of masculinity which contributed to their assaults has no place in our country.

My vote is for Eric Garner, Rekia Boyd, Alton Sterling, Sandra Bland, Philando Castillo, Mya Hall, Freddie Gray, Tamir Rice, and the hundreds of additional people of color who are victims of police violence. I voted because Black Lives Matter to me and I want them to matter to this country.

My vote is for Virginia Tech, NIU, Umpqua Community College, and many other campus shooting tragedies. It is for every time I walk into a new room on campus, I immediately identify my exits and think about a plan if a shooter showed up. It is for the yearly training I have to take my RAs through so 19-year-olds have the skills to escape or disarm a fellow student with a gun.

My vote is for dear friends, family members, and students who are impacted by mental health disorders. You are not crazy. You are not damaged. You have a health condition which needs compassion and treatment. And if you need it, you deserve affordable health care.

My vote is for my body and for the bodies of women everywhere. Our bodies are not punchlines or barometers of our worth. And we deserve to make our own decisions about our bodies. To the many women in my life who make decisions about birth control, fertility treatments, or to terminate a pregnancy for whatever reason, I trust you and I voted for you. I voted for us.

And if I’m being honest, this vote is also for me. For every time I’ve been ridiculed for being too prepared, too organized, too invested, too emotional, or not emotional enough. For the five-year-old Marci who said she didn’t want to be a teacher, but wanted to be the principal instead. For every time a man has interrupted me during a meeting or taken credit for my idea or called me a bitch behind my back. This is for all of the times I’ve let them. This is for the male colleague who told me “people will take you a lot more seriously if you wear high heels.” For being too loud, too quiet, and for being told I’m bossy since the day I was born. I’m not bossy. I’m a leader. And so is Hillary. That’s why #ImWithHer and I hope you are too. 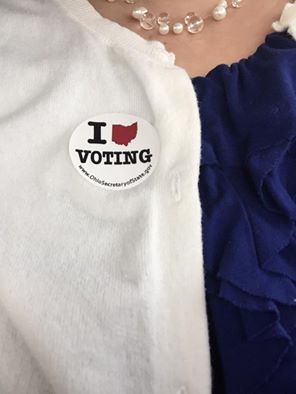