Travel vs. Tourism and Social Justice vs. Souvenirs

This post has been a long time coming. On the second day of the voyage, I watched an amazing workshop about the death of travel and the birth of tourism. The Dr. Tracy Ehlers asserted that travel as we once knew it is dead. It has been replaced with tourism. Tourism in the sense that you do indeed SEE the country in question, but it is through a protected pane of glass from your air-conditioned bus, or filtered through a savvy and well-trained bilingual tour guide. Since travel became more economical for middle- to upperclass families, the need for safety, security, and the sense of “getting the most for your money” has relegated us to sightseeing tours. To being shuffled from one monument or museum to the next so when you get home, you can boast to friends and family about the quantity of what you saw, but never the quality of the experience. As a result, members of the community in question need to cater to the tourist experience, sometimes out of convenience, but often more often about survival.

I really felt this come home for me while being a tourist in Guatemala. I am specifically using the term “tourist” versus being a “traveler” in Guatemala, because my experience started on an air-conditioned bus through the Guatemalan countryside. The views were spectacular. We saw coffee fields, sugar cane fields that were in the process of being burned (this is to get the poisonous snakes out so the workers can safely cut down the cane for harvest), plus a view of the Pacaya Volcano. This volcano is very active, and there was a plume of smoke and debris being shot out of the top when we passed by!

Just an active volcano spitting out ash as we drove by. Pretty typical day.

Our trip really began when we arrived at Lake Atitlan. If you EVER have the opportunity to visit Guatemala in general, or specifically Lake Atitlan, DO IT. It was one of the most amazing, gorgeous, pristine, inspiring views I have ever seen. The Lake was created after a series of volcanic eruptions blew the top off of one volcano, and the Lake was created after centuries of being filled with rain water. The indigenous Mayans have lived around the lake and surrounding mountains for centuries and much of their culture is tied to access to fishing, fresh water, and other opportunities that living next to a bio diverse lake creates. 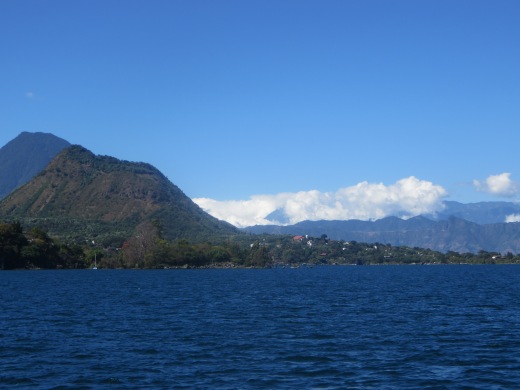 One of the best days of the entire trip

We took an hour boat ride to the other side of the lake to a small town called San Tomas. The moment we stepped off the boat, we were inundated with local men and women pushing their wares on us. Most had enough English to ask you to buy, ask your name, tell you their name, and some went so far as to place wraps, shawls, jewelry, or other items on members of our group, as a sales tactic. It felt very aggressive, and continued throughout our half-mile walk throughout town to get to the restaurant where we were stopping for lunch. The entire path was crammed with vendors, children selling bracelets, men selling hand-carved masks or flutes, the list goes on. It became clear that marching tourists from the boat dock through these stalls was a common occurrence, and most likely resulted in much of the income the people of the town came to depend upon.

We had a lovely lunch, were marched back the way we came, and continued to be barraged by men, women, and children and their variety of products. We got back to the boat and then waited almost 45 minutes for one couple who thought the 1pm deadline didn’t apply to them. This was the moment that the tourism vs. travel and social justice vs. souvenirs became painfully clear to me. Since we were tied up to the dock and on the boat, the women of the town essentially had a captive audience. Several of them were even bold enough to climb on board and try to sell their items.

Note: I asked this woman’s permission to take her picture and also paid her.

Going back a day to our pre-port briefing, a professor who has worked with the indigenous culture of Guatemala for over 30 years, talked about the culture of bargaining. There is something about rich people that makes them prone to barter with people who are not rich as a form of entertainment. A sense of pride happens when you get the handmade scarf down from $15 to $10, when the average Guatemalan makes less than $5,000 a year. The professor said it was okay to bargain, but then leveled with us. She said, “All of you can afford this trip. Therefore, if someone asks you to pay $15 for a scarf, if you have $15, GIVE IT TO THEM. Those five dollars mean much more to them then it does to you!”

Back on the boat, a Guatemalan girl of about 14 was trying to get $12 for a scarf and a Australian woman from our group told her she only had $10. She even opened up her wallet so the girl could see she only had a $10 bill. The girl ended up conceding and when she left the boat, the Australian woman opened up a second zipper of her wallet and $20 and $50 bills were literally spilled out of it. She was absolutely delighted that she was able to get away with such a “deal.”

The frantic selling continued until the oblivious couple returned and we headed back across the lake, to the safety of our buses. While on the way, I noticed a HUGE, American-style home on the side of the lake. I asked our guide, and he said much of the land is being purchased by American, Canadians, and Europeans for vacation homes since building materials, labor costs, and property taxes are next to nothing in Guatemala. As a result, the indigenous people of the lake are being forced to turn to tourism as a way to supplement their income, since they didn’t have the same lake access or land for farming.

When we got back to the buses, a minor altercation between passengers broke out because people didn’t sit in the same seats they came in. Meanwhile, 20 feet from us, a family of six was bathing, fully clothed in the lake we just traversed. The pettiness of those on board, especially in contrast to what was happening, quite literally, outside our window make me sick to my stomach.

There is a term we like to us in alternative spring break service trips called “poverty tourism.” This is the idea of rich (often White) people who go to impoverished nations, take pictures of Brown and Black children, buy some local items to feel like they’ve contributed to the local economy and therefore “done their part,” and returned unchanged, unmoved, and unmotivated to dismantle the systems they enjoy in order to impact the communities they just visited. By participating in tourism of developing nations versus traveling through them, having conversations and interactions with local people, asking and reflecting on how places could have such disparity, only a few thousand miles away from their home, tourists at best miss the point, and at worse, perpetuate the established system of inequality, privilege, and oppression.

The main lesson from Guatemala? Be a traveler. Experience the world, don’t just see it. And run, kicking and screaming, from any experience that caterers to tourists.