I have been looking forward to Costa Rica more than any other country on the trip. I’ve heard it is beautiful, inspiring, and I can now say that those words don’t do this country justice. As the most politically and economically stable country in Central America, Costa Rica enjoys a democratic government, amazing tourism industry, and almost 25% of the country has been categorized as national parks. The country realized decades ago that there was power in maintaining the natural wonder of the country, so it has been on the forefront of becoming a green, eco-friendly environment. Additionally, the have completely done away with their military (yep, you read that right, NO military) and taken all of that money and invested in their educational system instead. They realized that if anyone tried to start something, the US would come to defend them, due to their coffee, banana, and chocolate exports, in addition to sharing a border with the important trade country of Panama. Pretty genius, right?

Costa Rican countryside and coffee fields
In terms of exploration, I decided to sign up to see the Poas volcano. This volcano is part of the “cloud forest” section of the country. There are dry forests, which is what the majority of the US could be described as, then rain forests, and then, which I did not know, are cloud forests. These are ecosystems that thrive above the elevation where clouds appear. Therefore, we climbed from sea level to over 10,000 feet in about two hours! 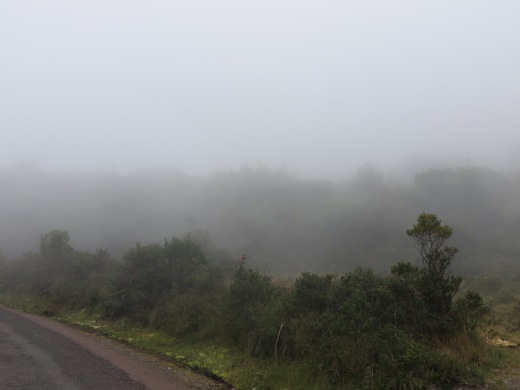 On the hike to the volcano. The Dementors were near!
We arrived at the volcano and the difference in climate was immediately clear. First, it was about 30 degrees colder! The weather report called for 95 degrees and sunny, but the middle of the cloud forest was about 60 degrees and a weird cloud haze hung about 10 feet off the ground. It was hard not to think that Dementors were around! We had to walk about half a mile to get to the volcano summit, but it was well worth the wait. Well, it was eventually worth the wait.
The tricky part of about being that far above sea level is that you are literally walking through clouds. Therefore, the volcano crater was completely covered with clouds for the first thirty minutes we were there. Our tour guide (who was seriously incredible) kept telling us to be patient, be patient. Then, a swift gust of wind swooped down, and blew away the cloud like the top of a dandelion getting blown away. You could see a lake at the bottom, craggily sides, and mineral deposits from millions of years of volcanic eruptions. The last eruption was in the 1950s, which is nothing in terms of geologic time, so it is very much still an active volcano. We were able to get some pretty incredible pictures, then it was time to head out.

There’s an active volcano underneath all of these clouds, promise! 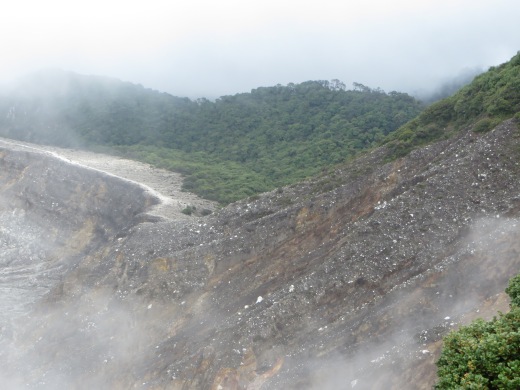 Finally getting a glimpse of the side of the volcano!
The next stop was a small, middle-class town of Sarchi. Sarchi’s claim to fame is an all metal church, designed by the same architects who designed the Eiffel Tower. We did a a loop around the church, then saw the world’s largest ox cart! Ox carts are a huge part of the Costa Rican culture, as they used to be used to transport coffee from one side of the country to the other. They started painting elaborate floral designs because the men were often gone for months at a time and their wives painted unique designs to remind them of home.

The detail was incredible!
Once again, we were ushered into a Costa Rican souvenir shop that had pretty much everything under the sun. I did the rest of my Christmas shopping, then we headed back to the ship, seeing the most incredible sunset over the Pacific in the process. It was an incredible day, and I know that I’ll be coming back to Costa Rica to explore sooner rather than later.

Not a bad way to end the day in Costa Rica