Learning to Be Human: A Day in the Dominican Republic!

First true port today!! After two horrible, sickness-filled days at sea, I was never more happy to be on dry land again. G and I both agreed that we had images of kissing the ground once we made port! I was signed up to go on the “Chocolate Lovers Tour” which was billed as seeing the chocolate process from cocoa bean all the way through to the final product. 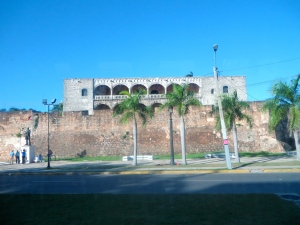 First port of call: Santo Domingo! This was the view we woke up to this morning.

We started by making port in Santo Domingo, the capital of the Dominican Republic. Santo Domingo was “discovered” by Christopher Columbus’ brother. Our tour guide, Paula, stated that the city boasts the first University in the Americas. She also said the minimum wage is about $200 per month, there is an 18% sales tax on everything, but only property tax on property that is $6 million and up. The country has to import nearly everything, so a gallon of gas costs around $6 per gallon. Higher education is affordable from a U.S. perspective, with a college degree costing about $600 total. (Please note: I haven’t fact-checked any of these items as I don’t have Internet connection on the ship, so take all of that with a grain of salt.) Paula had just finished up her college degree and spent a lot of time talking about her experience. My favorite quote from her was “In University, you not only learn your trade, you also learn to be human.”

I found this interesting because we had to go through the less developed portion of the city to get out to the cocoa plantations. It was hard not to notice the threadbare clothing of the occupants, unpaved streets, entire families of five riding on one motorcycle (no helmets for anyone), and the lack of trash removal. I found it to be a big disconnect to be riding around in these air-conditioned busses, some folks dripping in jewelry, and holding cameras that cost more than a year’s salary for the average Dominican. It seemed easy for most people to turn off that human part of themselves when seeing such a disparity of wealth and resources. This was particularly true when Paula talked about the strain on the country’s resources as a result of the earthquake in Haiti. The Dominican Republic estimates nearly 600,000 Haitian refugees have entered the DR and are usually employed in the jobs that Dominicans don’t want to do, like cutting sugar cane or picking coffee. However, there is a lot of anti-Haitian sentiment that Haitians are “stealing” jobs from Dominicans. Sound familiar? Immigration issues aren’t just for the United States.

We slowly winded our way out of the city, into lush landscapes. We knew it was going to be about two hours to the cocoa fields, but then Paula and the driver got into a heated debate in Spanish. Paula went back and forth between talking on her cell phone to what I assumed was the tour operation office and the driver. Apparently, there were two different plantations the tour office uses. The driver thought we were going to one and Paula thought we were going to the other! As a result, we went about 90 minutes in the wrong direction! Yikes! The positive spin I put on it was that we got to see about half of the entire country! 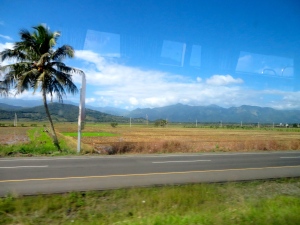 View of the countryside on the way to the cocoa plantation

Once we finally got to our destination, we were greeted by the employees of the plantation and offered fresh, hot cocoa. It was about 80 degrees with 70% humidity, but you do not pass up fresh hot chocolate! It was simply incredible, and the thickest, richest I’ve ever had. It put Nestle to shame! After that, we were walked around the different stations of the plantation to see how cocoa beans are planted, matured, grown, and gleaned. It was clear that the entire set-up was made for tourists, with cute, matching signs in Spanish and English and that the real work was done far away from where we were. Since this was my first port excursion, I didn’t really know what to expect, and had hoped for a more authentic experience. However, it was interesting to see the cocoa trees, taste the cocoa at every step of the process and realize that adding milk, sugar, and allowing it to temper really makes a huge difference!

Cocoa fields: I honestly had no idea cocoa grew on trees!

The beginning of all good chocolate. This pod was filled with slimy white things that contained the cocoa bean.

The white things go here for several days where bugs pick away the white casing and get to the bean. And. it. REEKED.

The beans then go to dry for several days. During the height of the season, this is filled to the top! 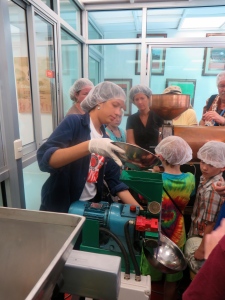 The beans then go through all kinds of processes to shuck, shell, smash, and extrude the oils. It tastes like nasty, bitter paste at this point. And the taste refuses to leave your taste buds.

This is when the magic happens! The chocolate is tempered, melted, and sugar and/or milk is added.

Tasting the chocolate I helped make! It was a much more pure and clear taste than American chocolate.

We had a delicious lunch of spiced chicken, rice, beans, plantains, and of course, hot chocolate, and then had time in the gift shop. I picked up a bunch of chocolate bars for my student staff with the hope being a chocolate tasting staff devo activity at our first staff meeting. I also got the DR’s version of Nutella, which is made with chocolate and macadamia nuts instead of hazelnuts, plus powdered hot cocoa mix so I could recreate my very own cup during the “cold” nights of Northern California. Next up, South America for the first time in Cartagena, Colombia!!!